Here is a sermon I preached in 2005.  Basic premise: we celebrate July 4th as ‘Independence Day’, however it is important to realize that this day was NOT the day we won the battle.  It was simply the day we DECLARED our independence.  There was a lot of blood shed and battles that continued after July 4th.

What is July 4th – Independence Day.

A battle was not won.  A Document was voted on.  It wasn’t even signed.

We celebrate our Independence Day as the day our make-shift congress voted on a document.

It was more than a document.  It was a declaration!

We, therefore, the Representatives of the united States of America, in General Congress, Assembled, appealing to the Supreme Judge of the world for the rectitude of our intentions, do, in the Name, and by the Authority of the good People of these Colonies, solemnly publish and declare, That these United Colonies are, and of Right ought to be Free and Independent States; that they are Absolved from all Allegiance to the British Crown, and that all political connection between them and the State of Great Britain, is and ought to be totally dissolved; and that as Free and Independent States, they have full Power to levy War, conclude Peace, contract Alliances, establish Commerce, and to do all other Acts and Things which Independent States may of right do. And for the support of this Declaration, with a firm reliance on the protection of divine Providence, we mutually pledge to each other our Lives, our Fortunes and our sacred Honor.

When you declare something it begins to manifest.

Digestion begins when food is placed in your mouth.

What do we need to be independent from?
Declaration – a statement asserting or protecting a legal right.
WE DECLARE TO OURSELVES, OUR PEERS, OUR ENEMY
I.  Declare independence from SIN.
The Lord Forgives and then asks us to stop sinning.
take the mind into captivity.
2 Corinthians 101By the meekness and gentleness of Christ, I appeal to you—I, Paul, who am “timid” when face to face with you, but “bold” when away! 2I beg you that when I come I may not have to be as bold as I expect to be toward some people who think that we live by the standards of this world3For though we live in the world, we do not wage war as the world does. 4The weapons we fight with are not the weapons of the world. On the contrary, they have divine power to demolish strongholds. 5We demolish arguments and every pretension that sets itself up against the knowledge of God, and we take captive every thought to make it obedient to Christ. 6And we will be ready to punish every act of disobedience, once your obedience is complete.

John Piper says that sin (lust for example) “gets its power by persuading me to believe that I will be more happy if I follow it. The power of all temptation is the prospect that it will make me happier.”

Charles Spurgeon says What settings are you in when you fall?  Avoid them. What props do you have that support your sin? Eliminate them.  What people are you usually with?  Avoid them.  There are two equally damning lies Satan wants us to believe: 1) Just once won’t hurt. 2) Now that you have ruined your life, you are beyond God’s use, and might as well enjoy sinning. “Learn to say no.”

Benjamin Franklin said It is easier to suppress the first desire than to satisfy all that follow it.

Romans 13:14, “But put ye on the Lord Jesus Christ, and make not provision for the flesh, to fulfill the lusts thereof.”

II.  Declare independence from your minds
Satan knows the battle for our souls begins in the mind.
The book of James clearly tells us that we sin when we are enticed and dragged away by
our sinful desires which start in the mind.
THE DARKEST PLACES OF THE WORLD ARE NOT BACK ALLEYS OF HARLEM, PARIS OR MEXICO CITY, BUT THE MINDS OF PEOPLE. A dark alley is just a dark alley until a dirty mind enters it.

California trip – gas 3.26/gallon – A dirty mind can pollute the streets of Beverly Hills.
Satan would love nothing more than to enslave us to our thoughts and desires, so that we
cannot love the Lord with our mind.

We can only experience freedom in Christ mentally when we fully give our minds to God.

John 8:35 So if the Son sets you free, you will be free indeed.
III.  Declare independence from your Emotions
not just talking to the women! Men and their trucks

IV.  Declare independence from Spiritual Apathy
another area of attack by satan is apathy. He doesn’t care if we are church-goers so long as we aren’t effective Christians. He doesn’t want us reading our Bible, praying, witnessing, worshipping.
He wants us to be Christian in label only.

God’s goal is to make us free in heaven with Him for eternity. God tells us how we can
become free:

TRUE FREEDOM COMES WHEN YOU ARE INHABITED BY GOD’S SPIRIT

God can free us, His Holy Spirit can help us live a controlled life. When we love him with all our heart (the seat of the emotions.)
He gives us the Holy Spirit to guide us, to encourage us, to rebuke us, to help us grow spiritually.

Do you know John Dickinson or Robert Livingston?  They both did not sign because they clung to the idea of reconciliation with Brittan.

PromiseLand Church is now podcasting again. However, this time we are podcasting the entire sermon every week!

There are a couple ways you can listen to the podcast.

If possible, please go to our iTunes page and RATE (5 stars 🙂 or REVIEW our podcast.  The more ratings and reviews the more we will show up in search engines and get a bigger audience!

If you have any questions, please comment below and I will try to help out!

The Passion
When the Passion of the Christ Movie came out our church rented 4 theaters and had over 1000 people attend the day before it released to the public (a great ‘anchor store’).  The news media was not interested in covering that story.  However, Randy invited a Jewish Rabbi to watch the movie with him at one of the theaters.  Since it was so controversial with Jews, the paper and TV channels were eager to cover the story of the Christian pastor and Jewish Rabbi watching the movie together.

PCD
In 1990, Randy had the ‘anchor store’/God idea to be a nationally known songwriter and recording artist.   He had a lot of talent in both of those categories.  However, when he went to Nashville and met with labels, they said they were not interested in signing a guy to a contract at that point.  He went back and found 2 old friends that just happened to be amazing singers and songer writers (C & D).  The three of them went back to Nashville and the rest is history.

END_OF_DOCUMENT_TOKEN_TO_BE_REPLACED

Marketing and PR according to Randy Phillips

Randy Phillips has a keen ability to make things happen and then to get other people to get excited about what he is making happen.  He was born with some of the talent, his father contributed to it, and a news editor at a local outlet put the icing on the cake.  I sat down to lunch with him the other day and he shared with me his Marketing/PR strategy from the ground up.

Let me back up just a little and say that I used to be on his staff and one of my three positions of the church was marketing/PR.  So, I am very familiar with his tactics and strategies as I used to be one of his key players on the team.  This stuff will not only help you tap into the news outlets, but the same techniques are used to garner interest from those in your church that are on the outside looking in. 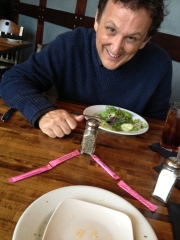 Anchor Store
As we sat at the table, he took the pepper shaker and stuck it at the middle of the table and said,  “You start with your ‘anchor store’, and then you build off of that.  Just like Walmart or Target is an anchor store in the shopping center with many smaller stores on the periphery, your ‘anchor store’ is the core idea that God gave you to begin with.”  Maybe it is a concert, a new program, a outreach plan, a new business or ministry idea.  God gives you an idea that will help accomplish his purpose.  You get fired up about it because you felt it came from God.  However, getting others to get on board is often a challenge.  (Especially those outside of your core ministry circle.)  Randy’s dad, Kenneth Phillips taught Randy a lot on this topic.  Thinking of the big idea.  Think outside of the box.  Be creative.  The anchor store is the foundation and in itself it needs to carry its own weight.

END_OF_DOCUMENT_TOKEN_TO_BE_REPLACED

sights and sounds of xmas

Xmas has been used for hundreds of years in religious writing, where the X represents a Greek chi, the first letter of Χριστος, “Christ.” In this use it is parallel to other forms like Xtian, “Christian.” But people unaware of the Greek origin of this X often mistakenly interpret Xmas as an informal shortening pronounced (ĕks’məs). Many therefore frown upon the term Xmas because it seems to them a commercial convenience that omits Christ from Christmas.