Won’t You Be My Neighbor | Week1 Sermon Notes 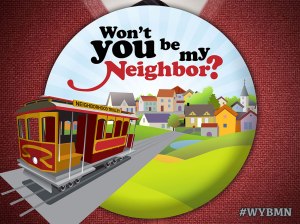 You can listen to this sermon podcast here.

Mr. Rogers was the nicest guy of all time. Seriously, Has there been anyone any nicer? Everything that I have heard about his real life and mirrored his character on TV. Fred Rogers was an ordained Presbyterian minister, but we don’t know about his love for people because of sermons he preached from a pulpit. He said he was inspired to get into television because when he viewed children’s television all he saw was anger. He was displeased with the way television connected with kids.

So, he got on television and loved on people of all races, abilities, and backgrounds.  Everyone was equal in his neighborhood. He would always ask, “Won’t you be my neighbor?”

What does it mean to be a neighbor? Who is your neighbor?

Mr Rogers always brought a bag with a special item in it.  I brought a mirror today. The mirror reflects who you are. We use it so that we can determine what our present condition is and we can make changes to improve. Scripture is often used in the same way. We look at ourselves in the mirror of scripture.

Jesus said in Matthew 22 that the whole Bible is boiled down to two things:

After hearing this thought, a man in Luke 10 asked, “Who is my neighbor?”  The scripture says that he was trying to justify himself.

He was trying to find a loophole.  Maybe we can be neighborly to only those we like or those we choose or those we agree with or those who like us first.

Jesus goes on to teach them who their neighbor is. He tells them the story of the “good Samaritan”. The whole point of the story is that your neighbor is the one that you don’t pick.

We often want to overgeneralize or even over spiritualize the term neighbor. Instead of it being those living nearest to us, we turn it into a term that is so general it is meaningless. When we insist that we are neighbors with everybody, often we end up being neighbors with nobody.

OR We end up “choosing” our neighbors that are not a hassle or ones that we can control or limit our amount of interaction. The people that live by us, yeah, they are our “neighbors” but they aren’t our neighbors. I mean God was talking about someone else.

But, I did and here is what the original Greek word: Pleysion means: “a person who lives close beside others”. The one near/close proximity. It simply means the people that live next to you. The people that God puts in your path.

Mr Rogers got it right in his song when the line said, “Since we’re together we might as well say”

END_OF_DOCUMENT_TOKEN_TO_BE_REPLACED

Won’t You Be My Neighbor Sermon Series 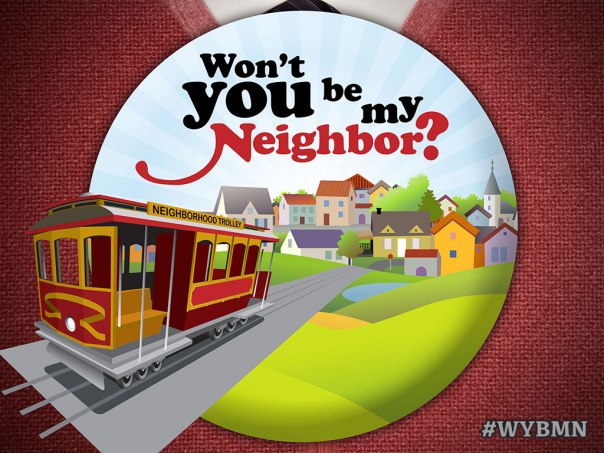 We are starting a sermon series on Oct 8th, 2014 called: Won’t You Be My Neighbor

Jesus used that phrase in one of the most powerful verses in the Bible.  In fact, he said that these verses were the foundation for the all of scripture.

In Luke ch10, a lawyer asked Jesus, “Who is my neighbor?”  He was hoping to find a loophole and not be forced to care for someone who was not like him or agreeing with him.

This sermon series will explore: