Today, we started off with a boat ride on the Sea of Galilee.  The weather was incredible.  Cool and crisp.  We loaded a large wooden boat and cast off for a 45min tour around the water.  We learned of the storms and position of Jesus walking on water.  We had a demonstration of casting a net. (it was not very authentic.  In fact, Will and I have the same cast net for salt water fishing in Texas. However, the whole experience was awesome.  To soak in the sights and be on the famous lake that I have read about all my life.  From the middle of the lake, you can see Mt Hermon where most people believe the Transfiguration happened.  It is the only snow covered peak in the Golan Heights.  Beautiful.

Sunrise over Sea of Galilee

Our crew headed to the boat ride on sea of Galilee 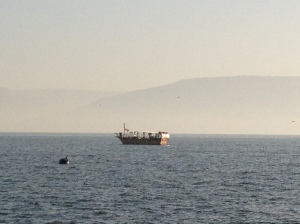 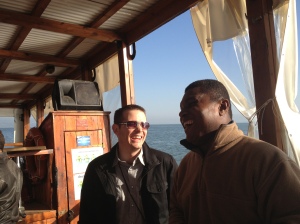 the boat had a Nigerian worship CD! We were jamming to that.

On left side is Tagba where 5000 were fed. On right is Bethsaida. Jesus walked on water in between.

From there, we went just about 5 miles down the Jordan River and we baptized two people in our group.  We put on swimming clothes and then purchased a gown to go over our clothing.  The water was ice cold.  The rest of the group sang Amazing Grace acapella as we went into the water.  After the baptism, we had a very emotional and powerful time of prayer and singing on the shore of the Jordan. We will never forget this moment.  There was actually a white bird that flew across.  However, it was not a dove.  It was more like a sea gull.

Baptism at the Jordan River

We left this portion of the Jordan and traveled south to the spring of Gideon where the army of 300 men defeated the enemy of the Jews.  This is a powerful story in the Bible where God reduces the number of people in the army in order to show his power.  In the same general area is where Saul was defeated and ended his own life.  We visited an ancient city that was discovered 50 years ago.  This city is thought to be about 3000 years old. It is called Bet She’an.

From there we traveled about 1 hour south to Jericho.  They claim it is the oldest existing city in the World.  (over 8000 years old).  This is the place where the walls came tumbling down.  We saw ruins of civilizations dating back to this period.  This is also where Elisha made the spring water sweet by throwing a bowl of salt in the water.  Also, Zacheous sat in the sycamore tree when Jesus entered the town.  They believe the mountain just outside the city is where the devil tempted Jesus in the desert. The stories go on and on.  I rode a camel here! 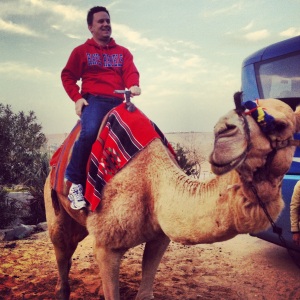 Camel Ride! I’m as tall as the bus!

Sycamore Tree over 1000 years old. Similar to the Zacheus’ tree. 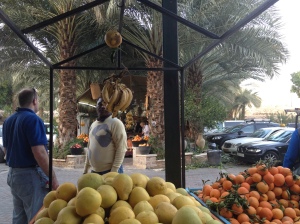 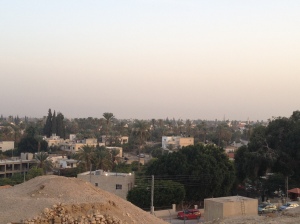 This pit is 40′ deep and each layer reveals a different society dating thousands of years. 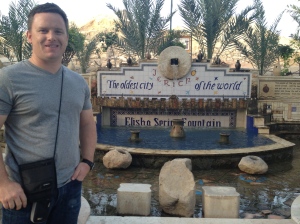 chillin in the world’s oldest city.

Our hotel is so sweet.

Jericho at night. It was busy.

Most agree that this is the mountain where Jesus was tempted to Jump after fasting for 40 days.

To see all the posts from Israel, click here.