We went to 4 locations along the Dead Sea.

1. Masada – I have to be honest. I had never heard of Masada.  It blew our minds, though. We took a cable car up a 1800 mountain in what looked like the Grand Canyon.  Basically, it was a remote Palace created by King Herod by the Dead Sea.  In 70 AD when the Romans took over things, it became a hideout for a radical group of 900 Jews.  The Romans discovered them a few years later and and did everything they could to capture the temple.  It took about 3 years, but the Romans finally built a ramp up the 1800 foot cliff.  However, when they got up there, they realized that the night before, the Jews had all taken their own lives so that they Romans wouldn’t have the pleasure in killing them.  To hear that story and see the amazing technology of water and food grown in the desert was incredible. 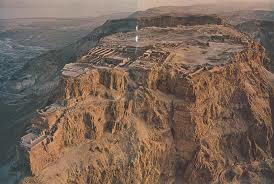 Masada was located on top of the mountain.  Many of the remains are still there.

2. En Gedi – This place is referenced by David many times.  In fact, it is where he cut part of Saul’s garment in the cave and spared his life when he could have killed him very easily.  I really wanted to visit this location.  So cool.  We saw deer that David referenced in the Psalms and also saw the spring of water that he referenced.

3. Qumran – This is there the Dead Sea scrolls were discovered in the early 1900s.  These scrolls were originally written between 30BC and 100AD.  They confirm the text that our King James Bible recorded.  There were over 14,000 scrolls discovered.  60% of the scrolls are still unread to this day! The Jews won’t release them.  A theory is that these people were converted by John the Baptist and were at the baptism of Jesus (just down the road) and that a copy of Matthew was also found.  The Jews don’t want it released.  The scrolls have already confirmed that John the Baptist did visit them!

4. Swimming in the Dead Sea!  We got in the Dead sea and actually floated effortlessly.  It was amazing!

Here are some samples of what it is like to be with our tour guide.  These were from today.

Posted on January 20, 2013, in Uncategorized. Bookmark the permalink. 2 Comments.