← How do we feel about Bill Cosby?
His Gift | Sermon Notes Week One →

We Have Been Given So Much 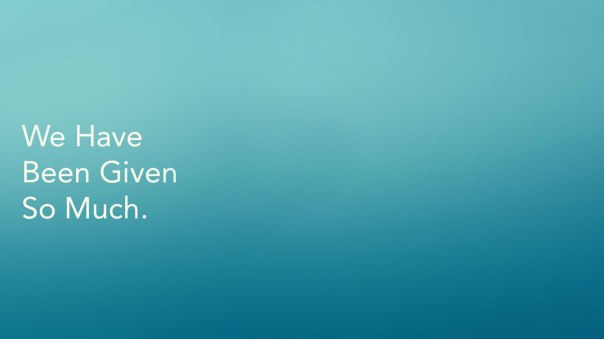 Luke 12:35 “Be dressed for service and keep your lamps burning, 36 as though you were waiting for your master to return from the wedding feast. Then you will be ready to open the door and let him in the moment he arrives and knocks. 37 The servants who are ready and waiting for his return will be rewarded. I tell you the truth, he himself will seat them, put on an apron, and serve them as they sit and eat!  38 He may come in the middle of the night or just before dawn. But whenever he comes, he will reward the servants who are ready.

Just for clarity. Here is another way to understand the suddenness of it.

39 “Understand this: If a homeowner knew exactly when a burglar was coming, he would not permit his house to be broken into. 40 You also must be ready all the time, for the Son of Man will come when least expected.”

41 Peter asked, “Lord, is that illustration just for us or for everyone?”

42 And the Lord replied, “A faithful, sensible servant is one to whom the master can give the responsibility of managing his other household servants and feeding them. 43 If the master returns and finds that the servant has done a good job, there will be a reward.  44 I tell you the truth, the master will put that servant in charge of all he owns.  45 But what if the servant thinks, ‘My master won’t be back for a while,’ and he begins beating the other servants, partying, and getting drunk?  46 The master will return unannounced and unexpected, and he will cut the servant in pieces and banish him with the unfaithful.

47 “And a servant who knows what the master wants, but isn’t prepared and doesn’t carry out those instructions, will be severely punished. 48 But someone who does not know, and then does something wrong, will be punished only lightly. When someone has been given much, much will be required in return; and when someone has been entrusted with much, even more will be required.

Jesus basically says there are three types of people.

(we all are managers of some sort)

Wise managers are taken very well care of. They are blessed and served BY the master.

Unknowing Managers are punished some.

So the question I have for you is:

It is difficult to figure out of you do not have the right perspective. I am so glad you came to church today or listened to the podcast. You are going to get a ‘MANAGER ADJUSTMENT’ today

When you look at other people’s lives around you, you want to be more like them or have more what they have. Everyone else looks better, smarter, funnier, more successful.

That is why trashy TV is so successful. We watch it because it makes us feel like our life is really not that bad.

Well, today I want to do the same thing, but not with trashy TV. Let me show you just a few things:

Our Americans have exponentially more money than 85% of the world.

We have access to the most powerful words in the history of the world.

Others across the planet will die today from starvation and mal-nutrition.

Others across the world are walking 100s of miles to escape war and rebel fighting.

Others across the world never know if they will have the opportunity to see their family again.

Our problems is that the wifi went down, that our tire went flat, that traffic is thick today, that our cell phone fell in water, that the hot water ran out after an hour long shower, that our team lost.

You have been born and placed in the wealthiest, most healthy generation since the Garden of Eden.  You living and working in the most prosperous geographical section of the world.  San Marcos was ranked in the last census as the fastest growing city in America for its size.  The economy in Central Texas is one of the strongest in the nation.

The first step is to recognize the source. We recognize today that we have been blessed well beyond what we deserve. If it wasn’t for the Grace of God, we would be lost, lonely, dead, and separated from Him.

But, our savior is unique.

Though he was God, he did not think of equality with God as something to cling to. Instead, he gave up his divine privileges; he took the humble position of a slave and was born as a human being. When he appeared in human form, he humbled himself in obedience to God and died a criminal’s death on a cross. Therefore, God elevated him to the place of highest honor and gave him the name above all other names, that at the name of Jesus every knee should bow, in heaven and on earth and under the earth, and every tongue declare that Jesus Christ is Lord, to the glory of God the Father.

Those who will serve communion today, please take your places and begin passing out the elements.

1 Corinthians 11:23…On the night when he was betrayed, the Lord Jesus took some bread24and gave thanks to God for it. Then he broke it in pieces and said, “This is my body, which is given for you. Do this to remember me.” 25In the same way, he took the cup of wine after supper, saying, “This cup is the new covenant between God and his people—an agreement confirmed with my blood. Do this to remember me as often as you drink it.”26For every time you eat this bread and drink this cup, you are announcing the Lord’s death until he comes again.

27So anyone who eats this bread or drinks this cup of the Lord unworthily is guilty of sinning against the body and blood of the Lord. 28That is why you should examine yourself before eating the bread and drinking the cup. 29For if you eat the bread or drink the cup without honoring the body of Christ, you are eating and drinking God’s judgment upon yourself.30That is why many of you are weak and sick and some have even died.

31But if we would examine ourselves, we would not be judged by God in this way. 32Yet when we are judged by the Lord, we are being disciplined so that we will not be condemned along with the world.

Posted on December 1, 2014, in Sermon Notes, theology and tagged bible languages, global income, luke 12:35, parable of servant, thanksgiving sermon notes, to whom much is given sermon, we have been given so much. Bookmark the permalink. Leave a comment.

← How do we feel about Bill Cosby?
His Gift | Sermon Notes Week One →