← Why Do We Watch Movies?
“What We Have Learned” sessions are set! →

Click here to listen to the podcast of the message.

“Wreck It Ralph” was released 8 months ago and has made $471million! Two major story lines that collide and twist. It is hilarious and completely appeals to the generation that grew up on 80s and 90s video games.

Ralph is very similar to our character last week, GRU. He is a bad guy but this time he’s a character in a video game. His job is to destroy buildings so that ‘Felix’ can fix them.  However, after the game gets turned off at night all the characters hang out and party except Ralph. He isn’t accepted because of this ‘bad guy’ status.  He DREAMS of the day where he is accepted and has all the benefits of the good guys.

He finds out that the only way he will have any credibility or acceptance by his peers is to earn a MEDAL.  This leads him on an extensive chase, risking his life to earn a medal.

This is where things get complicated. In his quest he meets another character with the same type of identity problem.  Vanellope is an ostracized young girl that is desperately trying to become a legitimate race car driver.  Like Ralph, she just wants to be accepted.  Like Ralph she wants to shed the ‘bad guy’ stigma.  Like Ralph she struggles with her identity.  In fact, she is called a glitch. She is flawed, defective, a malfunction, a mishap.

She was told, “You will never win a race because you’re am a glitch and that’s all you will ever be.”

Ralph seeks to find a medal or a sign to prove his value to those around him.  Jesus says it is ignorant to try and please the crowd.

The Pharisees (people that live upstairs) argued with Jesus.  Testing him, they demanded that he show them a miraculous sign from heaven to prove his authority.

Mark 8:12 When he heard this, he sighed deeply in his spirit and said, “Why do these people keep demanding a miraculous sign? I tell you the truth, I will not give this generation any such sign.

Jesus was confident in who He was. His identity was secure whether the crowd approved or not.  Whether he was voted into office or not.  He was secure. So secure that he would not pander or entertain.  He would not sell out or compromise in order to gain acceptance.

It is not important to find your own identity as much as it is important to understand the identity of Jesus.  Know how Jesus is.

Screen: Mark 8:27 Jesus and his disciples left Galilee and went up to the villages near Caesarea Philippi.

This was ‘out of the way’. It was morally filthy. Jews didn’t dare go. Baal was worshipped for years here and then the Greek god- Pan.  The opening of cave was called the gates of hell. The pagans believed that this was an entry point to sheol or hades and would perform rituals here to entertain pan who was believed to be half goat and half man. They would performs gross acts with goats in honor to Pan and even throw babies into the water of the cave to worship the fertility gods.   Jesus goes here on purpose. 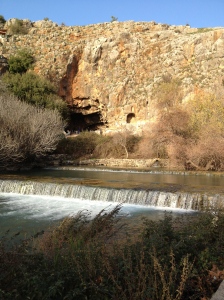 The Gates of Hell in Caesarea Phillipi

As they were walking along, he asked them, “Who do people say I am?”  28 “Well,” they replied, “some say John the Baptist, some say Elijah, and others say you are one of the other prophets.” 29 Then he asked them, “But who do you say I am?” Peter replied, “You are the Messiah.”

Screen: Matthew 16:18 Now I say to you that you are Peter (which means ‘rock’), and upon this rock I will build my church, and the gates of hell will not conquer it.

Notice that Jesus does not try to establish the Peter’s identity until Peter proves he really understands Jesus.

The foundational part of finding your identity is making sure you know who Jesus is.

Notice the power that follows the revelation of Jesus Christ.  Look what it could do to your identity.  Your value and worth could be wrapped in the eternal identity of God and the power of Jesus Christ instead of the temporal trophies and accolades of man.

Remember, most of us try desperately to impress people that are too caught up in their own life to notice.

In Wreck it Ralph, Ralph succeeds in getting a medal (although, he sort of cheats to get it) and he returns thinking he will finally cash in and find the answer to his greatest dilemma.  Here is what happened.

Chasing after accolades and worldly accomplishments will not pay off.  Only what you do for Christ will last.

Luke 9: 23Then he said to the crowd, “If any of you wants to be my follower, you must turn from your selfish ways, take up your cross daily, and follow me. 24 If you try to hang on to your life, you will lose it. But if you give up your life for my sake, you will save it.

Mark 8:34 Then, calling the crowd to join his disciples, he said, “If any of you wants to be my follower, you must turn from your selfish ways, take up your cross, and follow me. 35 If you try to hang on to your life, you will lose it. But if you give up your life for my sake and for the sake of the Good News, you will save it.  36 And what do you benefit if you gain the whole world but lose your own soul?  37 Is anything worth more than your soul? 38 If anyone is ashamed of me and my message in these adulterous and sinful days, the Son of Man will be ashamed of that person when he returns in the glory of his Father with the holy angels.”

← Why Do We Watch Movies?
“What We Have Learned” sessions are set! →