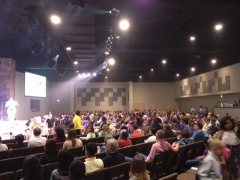 This sermon was preached on EASTER Sunday 2013

This year instead of asking what the Resurrection means to “Me”, we ask what does Resurrection mean to “Us”.  To “Me”, it means that I am saved.  I’m still living here.  Now what?  Why in the world does he leave us here?

After the resurrection, Jesus hangs out with them for about a month and then while they are all on the Mt of Olives, he says to all them, go to the Upper Room and wait on my Spirit to return to the Earth. They are all like..What the?!  They were hanging with Jesus and everything was good.  He was back. Yeah! He rose from the grave.  It’s like…have you ever been with someone and they are talking about leaving and you are like ‘cool, lets go’ and then they turn and say…Uh you stay back here and hold down the fort.

What does Easter mean to Us?  What do we do with all this going on?  Look, we are all still here.  Look at your neighbor and ask them, why did he leave us?

Let me give you a super quick history lesson of Christianity over the last 2000 years.  I use that term Christianity very loosely because only a few hundreds years after Jesus, most were not like Jesus, though did a lot in his name. At first, people were intensely obedient to God, went around the world and spread the gospel.  Most were executed by brutal tactics.  Then, Christianity became the law of the land with Constantine.  There is a brutal, bloody rivalry between Islamists and Christianity.  Then, things went dark.  Then, the renaissance period, the reformation of Christianity, the new world, America. God blesses America and we see great success. Then we as a nation turn from God, though there are a lot of individuals living for Him.  You were born.  You were born in a culture that is so blessed and living well that people don’t even need God anymore.  They don’t look forward to heaven.  They don’t even need each other.  In fact, we honor and respect the ‘self-made man’.

The ‘Community’ simply means people that live in the same geographical location.

The ‘Church’ means a place you visit on Sunday.

John 16: 7 But in fact, it is best for you that I go away, because if I don’t, the Advocate (helper/comforter) won’t come. If I do go away, then I will send him to you. 8 And when he comes, he will convict the world of its sin, and of God’s righteousness, and of the coming judgment. 9 The world’s sin is that it refuses to believe in me.

John 17: 13 Now I am coming to you. I told them many things while I was with them in this world so they would be filled with my joy. 14 I have given them your word. And the world hates them because they do not belong to the world, just as I do not belong to the world.  (the world is full of ideologies that are opposed to Jesus’ teaching.  To the Word of God.  Jesus expects us to stick to the Word and work through the reality of being hated) 15 I’m not asking you to take them out of the world, but to keep them safe from the evil one.  This doesn’t mean unharmed from trials or difficulties but safe from separation from God.

In the final portion of Jesus’ prayer we get the message of what Easter means to US (To the City):

John 17: 20 I am praying not only for these disciples but also for all who will ever believe in me through their message.  21  I pray that they will all be one, just as you and I are one—as you are in me, Father, and I am in you. And may they be in us so that the world will believe you sent me. (Jesus is God) 22  I have given them the glory you gave me, so they may be one as we are one. 23  I am in them and you are in me. May they experience such perfect unity that the world will know that you sent me (Jesus is God) and that you love them as much as you love me. (The good news!)

Jesus is leaving and we are staying.  His Spirit returns to empower Us and His Word Sanctifies Us.  We will be hated but protected from the evil one.  We will become One and the World will Know.

Let’s look at three concepts from this Revelation:

1.  We Are His People – those created by faith through His gospel

1 Peter 2:8…They stumble because they do not obey God’s word, and so they meet the fate that was planned for them.  9 But you are not like that, for you are a chosen people. You are royal priests, a holy nation, God’s very own possession. As a result, you can show others the goodness of God, for he called you out of the darkness into his wonderful light.  10  “Once you had no identity as a people; now you are God’s people.  Once you received no mercy;  now you have received God’s mercy.”

Holy – Set apart.  Distinct. Different.  A new society. What everything could be under the kingship of Jesus Christ.  How we do all things in life.  Virtually every aspect has to be changed by the gospel.

Royal Priests – mediators, speak to God on behalf of people, counselors, deeply involved in the people’s lives to bring them to God.  A kingdom of priests. Pouring ourselves out to the people around us. Bringing them to God.

2.  We Are His Body – Those who are members of one another in His life

Galatians 6:10…whenever we have the opportunity, we should do good to everyone—especially to those in the family of faith.

Ephesians 2:19 So now you Gentiles are no longer strangers and foreigners. You are citizens along with all of God’s holy people. You are members of God’s family.

1 Peter 4:17 For it is time for judgment to begin at the household of God; and if it begins with us, what will be the outcome for those who do not obey the gospel of God?

Romans 12:10 Love one another with brotherly affection. Outdo one another in showing honor.

In the early 20th century, we saw a vivid picture of what a ‘people’ could be.  Africans Americans were Segregated and ostracized. By standing together in the midst of tremendous persecution in the South, blacks demonstrated the power of a people.

Facing in surmountable odds, murder, discrimination, betrayal, blacks understood that their survival was determined by their unity.

John W. Blassingame  wrote in his book The Slave Community “Since the time of slavery, biological families were often ripped apart.  As a result, they looked to whoever that was in their cabin as family. Africans learned very quickly that they must adopt each other as relatives.  Even at this present time, a term called “fictive kin” is used to express people who are not related but are a part of a black family.  That is the reason why blacks call each other brother or sister. This slave family provided an important buffer, a refuge from the rigors of slavery.”  They would gather each night and worship together.  Singing songs like “When we all get to heaven there is no parting there.”

A deeper truth that Rev Martin Luther King helped us realize is they are not a people.  They are my people.  We are a family not because of our sin color or our economic status, but because of our position as children of God.

We are an alternative society that models distinctive ways to do everything in life.

You can’t change the world apart from Community  In Community, we reach the world by demonstrating the Gospel.

We take money, sex, and power and demonstrate how God intends for them to be used. Life giving things.  Humility.  Assembling with odd people that are not like us.  The power of unity around the Gospel.  This is ATTRACTIVE and demonstrates the John 17 unity in Jesus’ prayer.

The new distinct community is a sign for what the Gospel is. The power it holds.

In the future, God is going to unite and heal all things under the lordship of Christ.

Ephesians 1: 7 In him we have redemption through his blood, the forgiveness of our trespasses, according to the riches of his grace, 8 which he lavished upon us, in all wisdom and insight 9  making known to us the mystery of his will, according to his purpose, which he set forth in Christ 10 as a plan for the fullness of time, to unite all things in him, things in heaven and things on earth

It goes on to say that We have the Holy Ghost that is a ‘deposit guaranteeing’ the future restoration.

Currently, the church is to model what the future society under Christ will look like.

We are to model the transformation that the gospel makes to every area of life.

From Timothy Keller’s Book “Gospel in Life’:  Princeton’s Robert Wuthnow: ‘small groups mainly provide occasions for individuals to focus on themselves in the presence of others.  The social contract binding members together asserts only the weakest of obligations.  Come if you have time.  Talk if you feel like it.  Respect everyones opinion. Never criticize. Leave quietly if you become dissatisfied.

In ‘Overcoming Loneliness in Everyday Life” two Boston psychiatrists suggest that “groups fail to replicate the sense of belonging we have lost.  Attending weekly meetings, dropping in and out as one pleases, shopping around for a more satisfactory or appealing group- all these factors work against the growth of true community.”

The gospel instead roots me in the love of god and now I enjoy others for WHO THEY ARE not just how they make ME feel. Gospel shaped people are enabled to form deep community and on other hand only deep community shapes  you in the Gospel.

Talk, eat, confess, hold accountable, learn, study, until…. You get to that level and committed.  It is the one another passages: honor, serve, hospitality, encourage, accept, teach, love, admonish…

The Gospel changes us through community.  It is possible to have a dramatic, emotional, personal experience woth Jesus, yet don’t change because you don’t submit to community.